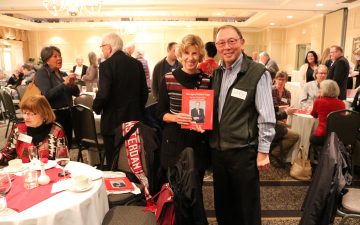 Thursday, Nov 16th marked a huge milestone: the unboxing of the books fresh from the printer. Copies were distributed to storytellers, benefactors, supporters, and pre-orderers who were able to come to the by-invitation-only occasion at the University Golf Club.

MC Butch Braidwood welcomed the gathering of over 70 guests. “Without your stories, financial support, and helping us get the word out, there would have been no book and no one here tonight. But we did it. We all did it.”

He introduced The Friends of Walter Gage and described the vital role that each person played. “The whole thing began at an Engineering alumni social event in Feb 2016. A brief conversation asked why very few campus students knew who Walter Gage was. The idea came up we should write a book. Before you know it, we had a team in place.”

Jim McEwen spoke about the generosity of the benefactors who provided the initial funds to launch the project. Using a brilliant idea from Michael Davies, an account with the Applied Science faculty was opened which offered a tax-deductible receipt. Jim asked for a round of applause be given to three students – Connor Jameson, Jane Procyshyn, and Joshua Sam. They were tasked to bring the books and look after the evening’s book delivery and payment processing. 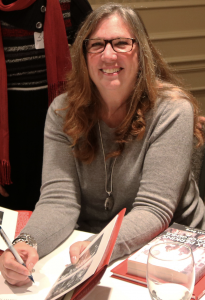 Shelley Fralic humorously shared what’s it like being relentlessly pursued by Jim. After 462 days, what started as a firm “No, I just retired” eventually became “Yes, only to shut him up!” And Shelley shared she was really glad that she changed her mind. From her research in the UBC Archives and reading of many collected stories, she discovered why Walter Gage meant so much to so many people.

Shelley’s “partner in crime” Kate Bird was the photo editor. She took great pleasure in creating high quality images for the book and acknowledged the many sources for their time and cooperation. Editor Danny Peart thanked everyone for their contribution. “It took a strong team effort to produce what we feel is an outstanding book for you to read and own.”

Gary Wong announced that all submitted stories would now be posted on the companion website. He suggested people read the 80+ website stories and let others know about them. “I’m hopeful your actions will trigger memories and lead to more stories being entered. I know there are some real gems out there about Walter Gage just waiting to be told.”

Gary led a big shout out to Deanna, Tara, and Debbie from Applied Science Alumni Relations for all their support including hosting the companion website and managing the donor funds.

Jim mentioned that book distribution arrangements are underway. An official book launch is targeted for early next year. All new information will be posted on the website.

Butch ended the night by conveying his thanks to Ron Strong (APSc Mech ’67) for graciously being tonight’s event sponsor, Tammy Brimner for being the official photographer, and his wife Robin’s contribution at the reception table with Michael Davies.