The Friends of Walter Gage participated 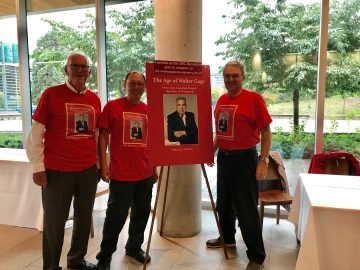 Paul Preminger (1966) and his daughter Whitney dropped by. Whitney who works at the RH Lee Alumni Centre gave her father a copy of the book as a Christmas present. 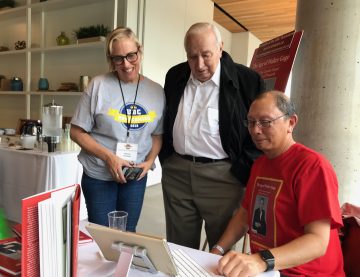 Paul recalled seeing Walter Gage in the Buchanan building. As another example of his amazing memory, Walter’s first words were “You are Joe and George Picha’s younger brother?”

“He then asked if I came to see him about money.  When I said yes, he handed me a handful of cash (about $500, if I remember correctly) without anymore conversation. No papers to sign, just ‘It is nice to hear that your brothers are doing well.’ Walter Gage was a truly great man and a tremendous Professor!”

On the lighter side, Paul talked about his basset hound named Jeeves. Jeeves used to follow him to class on some days. One morning he made himself comfortable laying on the floor under the blackboard. Walter Gage taught class that day while stroking Jeeves’ belly with his foot!’

Later in the afternoon Michael and Gary attended the Faculty of Applied Science Homecoming BBQ. They were pleased to be walking billboards wearing their Age of Walter Gage book t-shirts. Joining them in the photo is Tara Newell, APSc Alumni Relations Coordinator. 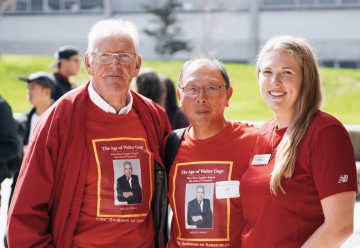